In 2016, 12.6% of live births in the state of Louisiana occurred in Baby-Friendly hospitals, according to the CDC.  Just two years later, that number is 41.6%. In fact, Louisiana is now one the states in the darkest color on this map from the CDC’s 2018 Breastfeeding Report Card, meaning it now has one of the highest Baby-Friendly penetration rates in the nation: 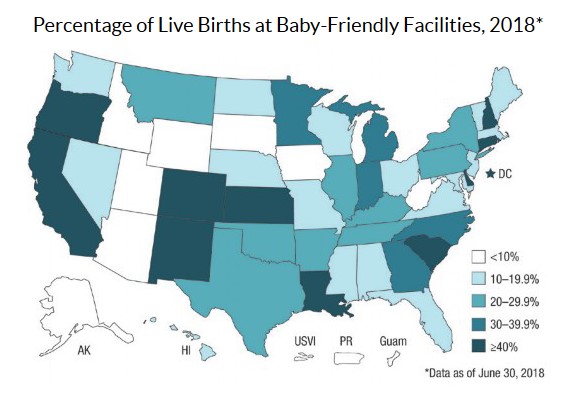 How did this important growth occur? And how has it changed the lives of providers, parents and children in this Deep South state?

For answers to these questions, we spoke with some key members of the maternity services team at Woman’s Hospital in Baton Rouge, the largest birthing facility in Louisiana, which added 8,000 annual births (almost 13% of the births in the state) to the Baby-Friendly ranks when it was designated in March 2018. 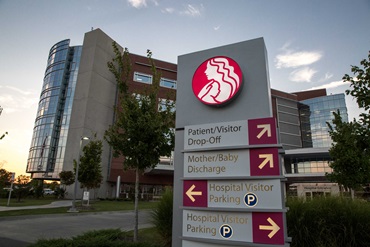 Woman’s Hospital is one of the hospitals enrolled in EMPower, which, like CHAMPS, has targeted mostly southern states to help hospitals achieve Baby-Friendly designation as one way to help address racial disparities in breastfeeding rates.

The journey to Baby-Friendly has not always been easy, explains Cheri Johnson, Vice President of Perinatal Services at Woman’s, but it has been rewarding.

“From the administrative perspective, the decision to go Baby-Friendly was easy,” says Johnson.  “But then when you start to do the work, that’s when the rub kind of hits. We’re changing a culture and we had a few hiccups here and there.”

One such “hiccup” occurred when the hospital produced its first Baby-Friendly poster with a picture of a mother breastfeeding.

“We had a beautiful woman on the front of it and she’s breastfeeding her baby,” recalls Johnson. “When I first sent that out, I had a male colleague of mine say, ‘Oh, this is risqué.’  And I was like, ‘This is not risqué at all. It’s beautiful.’ So, we needed to work through that kind of thing and change that whole mindset.”

Getting Everyone on Board

One critical component of the work at Woman’s was staff training.

“The Baby-Friendly experience has really helped us drive our evidence-based practice and assure our patients that we are practicing to the highest standards,” says Angela Hammett, Community Education Manager at Woman’s. “It makes me feel really great as an employee that our organization has been totally committed to educating not only our patients, but also our staff members. We educate every staff member about what it means to be a Baby-Friendly facility and why they should be proud to work at a Baby-Friendly facility.”

One important piece of the education was an internal informational fair based on the theme of running a 10K race, where each “K” was a station with information about one of the Ten Steps to Successful Breastfeeding. Almost 600 people attended.

“Our goal was to normalize breastfeeding,” reports Johnson.

But it also became clear that this shift in mindset needed to extend beyond the staff because many other people in the hospital can affect a mother’s experience. One such person was a contract security guard.

“She told a mom who was breastfeeding in one of our public areas that ‘Nobody wants to see that here’” says Johnson.  “That’s a symptom of how breastfeeding is viewed in our state.”

Rather than chastise the security guard, the staff at Woman’s saw it as an opportunity to educate and offer a new perspective.

“It’s really just breaking the whole thing down and normalizing that this is another way to feed the infant and that it’s OK. There should be no shaming in feeding your infant in a hospital,” says Johnson. “I think culturally, seeing that shift and having a culture that supports that kind of environment is key.”

“I think our biggest lesson with the Baby-Friendly journey is that it’s not just the nurses and mother/baby, it’s not just OBs, it’s not just pediatricians,” says Patricia Johnson, Senior Vice President of Patient Care and Chief Nursing Officer (no relation to Cheri Johnson). “It’s the whole organization, the whole community.”

The staff at Woman’s are also quick to point out that Baby-Friendly protocols are about much more than breastfeeding.

Implementing Baby-Friendly practices has resulted in a complete transformation of the birth experience at Woman’s – for providers as well as for mothers and family members.

“Before we were Baby-Friendly, the doctor cut the cord and they’d show mama the baby without actually letting her touch the baby,” says transition nurse Kellie Benton. “And then the baby was whisked over to the warmer in the corner and we would make sure baby is vigorous and doing well and do a head-to-toe assessment.  And then we would wrap baby up and let mama hold baby.  It was a good 10 minutes before they were able to hold the baby.”

Implementing the practice of skin-to-skin changed all of this.

“Baby-Friendly taught us how important that immediate contact, that immediate bond is with baby and mom after delivery,” says Benton.  “So now if the baby is stable and vigorous, we leave baby on mama’s chest and let them get the first little hugs in with their baby.”

For Benton, the change was a little unnerving at first.

“With skin-to-skin, you’re kind of waiting to make sure everything’s OK.  You know that their heart sounds great, you know that their lungs sound great, but you can’t visualize them as much as you can when you get them in a warmer. But then the more you do it, the more you realize everything is alright.  The heart rate is fine, baby’s breathing well, and they’re fine.  Your head-to-toe can wait.  It’s just a change in your thought process,” she says.

Family members needed to adjust their thinking as well.

“We get lots of family members visiting down here,” says Cheri Johnson. “Sometimes it’s standing room only. But one of the most precious moments is right after you have the baby, and it’s you and your partner and you’re skin-to-skin with the baby, and you’re not in the frenzy of the baby being passed around from family member to family member and missing that opportunity.  That’s been a big shift for families.”

Giving It a Try

Skin-to-skin contact not only builds the mother-baby bond, it also triggers breastfeeding impulses for both mother and baby.  And once in a while, a mother who was not planning to breastfeed changes her mind in that moment, according to Mother/Baby Nurse and Certified Lactation Counselor Cynthia Evans.

“We encourage all moms to do skin-to-skin right at delivery, whether they are breast or bottle feeding,” says Evans.  “It’s generally beneficial for the baby, not just exclusively for breastfeeding.  It helps regulate heart rate, blood sugar, breathing.  And sometimes a mom who plans to bottle feed does skin-to-skin and sees what that baby is doing while the baby is there, occasionally we do have a mom say, ‘Well, I guess let me just try it.’  And then they take off from there and do well.”

Mothers who have delivered babies at Woman’s before and after Baby-Friendly practices were implemented notice and appreciate the change.

Shamita Collins delivered all four of her children, three girls and then one boy, at Woman’s Hospital.  The boy, Kenrick Jr., was born after the hospital was designated as Baby-Friendly. She immediately felt the difference with the skin-to-skin practice.

“It was amazing, that bonding time,” Collins says.  “Especially when they come out and they’re crying, I think it’s very good to have them to sooth them when they’re first in the world.  I really loved that part about it.”

The breastfeeding experience with her son was different for her as well.

“He latched on sooner and was feeding sooner than my girls.  And then I received a lot of help with lactation in the department and everything. They kind of came around more this time than previous with asking if I needed any help.  Because at first it was hurting a little bit and they kind of helped with his latch and make sure he was latching on correctly so I wouldn’t be sore and everything.  It was really helpful.  So that was a big difference as well.”

“It was really nice.  I got to sooth her a little bit.  My husband was able to look at her.  My mother-in-law was in there, so we were all just staring at her.  It was really sweet.  I’m so glad we had that time.  It was perfect,” she says.

The most inspiring thing about the commitment to Baby-Friendly among staff at Woman’s Hospital is the connection they all make to the big picture – to the opportunity to improve lives in their state.

Cheri Johnson sums it up this way:  “I’ve often said, I wonder if 20 or 30 years from now, are we going to change the incarceration rate in our state because of the improved mother/baby attachment?  Or are we going to have higher high school graduation rates, or what else?  Of course, there’s not just one thing that leads to widescale improvement like that, it’s got to be several things.  But I can’t help but think that offering that bonding time is going to have a strong impact on our families and our community.

“If we can increase the breastfeeding rates in our patients, we can really move the health of the entire state,” Patricia Johnson says.

“It’s exciting when you see the numbers tick up,” concludes Angela Hammett, “because we’re affecting not only the health of this generation, but generations to come. It’s very exciting and empowering.”