Fact vs. FIB: The Impact of Baby-Friendly on Breastfeeding Initiation Rates

Fact vs. FIB: The Impact of Baby-Friendly on Breastfeeding Initiation Rates

From 2007-2015, the percent of live births occurring in Baby-Friendly designated hospitals in the US increased from 1.8% to 11.5%. During the same period, the percent of babies who were “Ever Breastfed” in the US grew from 75.0% to 83.2%. These two data sets, provided by the CDC’s Breastfeeding Report Card for these years, are plotted against each other in the following chart: 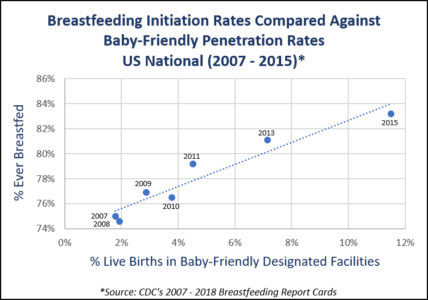 While one cannot infer causality, it is clear from these data that higher Baby-Friendly penetration rates were associated with higher breastfeeding initiation rates in the US during this time.

We created this chart to respond to ongoing false and misleading claims being circulated. As we have said over and over again for the past few years, Baby-Friendly USA (BFUSA) is committed to supporting the public and the hospitals that have worked so hard to earn the Baby-Friendly designation by providing sound data interpretation and pointing out inaccuracies and falsehoods when they are propagated.

The most recent example of data distortion is a novel but incomplete presentation of data in a study1 published last month in The Journal of Pediatrics, which Fed Is Best (FIB) has now leveraged into sensationalized social media posts and this erroneous and deceptive headline on its website: “US Study Shows Baby-Friendly Hospital Initiative (BFHI) Does Not Work.”2

Based on what evidence do they make this claim?

The authors of the study in question sought, among other objectives, to determine if there is a correlation between the percent of live births occurring in Baby-Friendly designated facilities and the breastfeeding initiation rate in each state. Unfortunately, the methodology they used to explore this question supports a faulty conclusion.

Here’s how they approached the analysis…

The authors selected data from the CDC’s Breastfeeding Report Card from only two years. They took the state-by-state “Percent of live births occurring at Baby Friendly Facilities” data from 2016 and compared these to the state-by-state “Ever Breastfed” data from 2015. They then ran a regression analysis on the two data sets to determine if there was a correlation between the two and concluded there was no association. While it may be true that there is no correlation between these two specific data sets, the analysis is deeply flawed.

The first problem is that the authors did not examine data over time. The BFHI, like all improvement initiatives, is about change over time, yet this study did not take that into account.

The second problem is that the authors committed an error known to statisticians as an ecological fallacy by comparing states, instead of comparing data across the whole country. They did not account for the fact that states have vastly different baseline breastfeeding rates due to underlying socio-demographics.

Higher Baby-Friendly penetration rates are indisputably correlated with higher breastfeeding initiation rates across the country and across time.

While that is clearly the conclusion we would wish to reach, it also happens to be the truth told by a complete and statistically sound analysis of publicly available data. We, therefore, respectfully request that researchers and publishers do a more thorough investigation before publishing damaging conclusions from incomplete data – and that those who feed on these misguided conclusions seek the truth over inflammatory headlines.

Notes:
1. ncbi.nlm.nih.gov/pubmed/31623856
2. fedisbest.org/2019/11/u-s-study-shows-baby-friendly-does-not-work/
3. The chart and data in the first paragraph have been updated to correct an earlier error. Click here to learn more about it.