Fact Vs. Fiction: Calling Out a Misleading FIB

Fact Vs. Fiction: Calling Out a Misleading FIB

One of the BFHI’s principal detractors has based much of its rhetoric on a blatant misinterpretation of a now-outdated ABM protocol. We want everyone to know the facts. 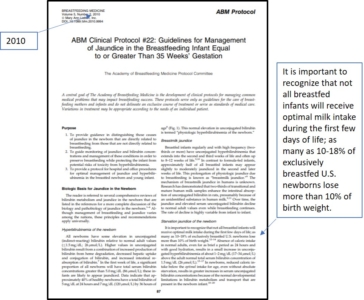 The ABM’s 2010 “Clinical Protocol #22: Guidelines for Management of Jaundice in the Breastfeeding Infant Equal to or Greater Than 35 Weeks’ Gestation” contains the following statement:

“It is important to recognize that not all breastfed infants will receive optimal milk intake during the first few days of life; as many as 10–18% of exclusively breastfed U.S. newborns lose more than 10% of birth weight.”

The Fed Is Best Foundation has repeatedly referenced this statement as evidence to support their sensationalized criticism of the BFHI. Unfortunately, they have misinterpreted the statement, frequently claiming on their website, blogs and social media channels that:

“10-18% of babies experience starvation jaundice from insufficient milk intake, according to the Academy of Breastfeeding Medicine (ABM) jaundice protocol.”

Let’s be clear. Observant readers will immediately recognize the inconsistency in these statements and understand the ABM statement makes no claim about starvation jaundice. Excessive weight loss is associated with increased risk of jaundice, but to imply a direct correlation between the two is irresponsible and misleading.

Using false interpretation of scientific findings to advance a campaign of misinformation is bad enough. What’s worse is that their public relations efforts have led to this inaccuracy being carelessly republished as established fact in popular media and have thus contributed to a corroding of public attitudes about the well-established benefits of breastfeeding.

What’s more, this organization continues to reference this “finding” while the ABM has since published a 2017 revision to the protocol, “ABM Clinical Protocol #22: Guidelines for Management of Jaundice in the Breastfeeding Infant 35 Weeks or More of Gestation—Revised 2017,” which no longer even contains the “10-18%” statement.

We consider the constant repetition of this and other falsehoods to be reckless and negligent behavior and call on this organization to be more responsible in providing the public accurate and scientifically-grounded data.

Please note: We have chosen to not share links to the posts referenced herein because we don’t want to give these inaccuracies any more “airtime.” We will provide references for those who contact BFUSA directly with that request.